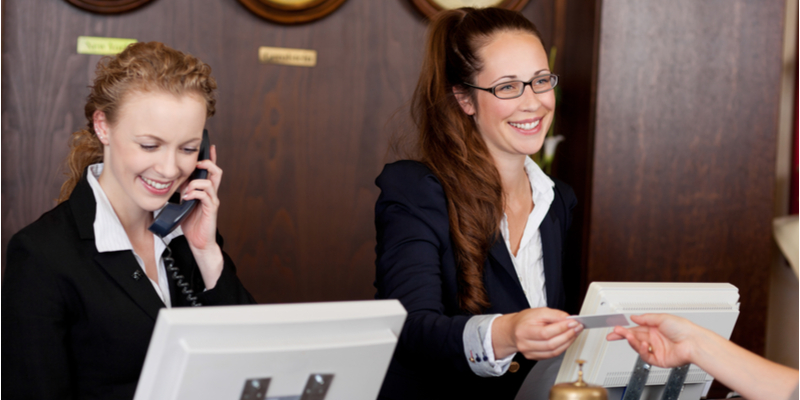 The hospitality industry has relied on two-way radios for years to meet the needs of their clientele. Today, people have more choices than ever when it comes to where they want to spend their hard-earned money. Hotels, restaurants, bars, and a variety of other businesses compete to win over customers.

As an establishment in the hospitality sector, your ability to communicate quickly and with ease can make a difference in the experience of your guests. Many businesses have found themselves in a position where their current communications solution interfered with their ability to provide high-quality customer service. You don’t have to let this happen to you.

As the technology behind two-way radios continues to expand, more people are making the change from analog to digital two-way radios. Here’s an overview of the two, highlighting the benefits of switching to digital radios for the hospitality industry instead of using older analog radios.

If your hospitality team struggles with communication interreferences it might have to do with the presence of large concrete walls, basements or other structural obstructions within your building. In addition, urban locations blocked in by other tall buildings can greatly impact signal strength.

While analog radios are easy to use with push-to-talk features, they often fall short and can lose signal in ‘dead zones.’ On the other hand, digital two-way radios offer improved audio quality and a wider range than analog radios.

Plus, they are equipped with better resistance to interreference and transmission issues. Thanks to digital correction technology, there is minimal issues with voice communication, even if the signal fails.

Large resorts and theme parks are just a couple examples of hospitality industries where wide-area range is an important factor.  Analog and digital radios transmit signals over radio channel user carrier frequency waves, either via VHF (Very High Frequency) or UHF (Ultra High Frequency). Analog signals use frequency modulation, which gets weaker and weaker as it nears its maximum range – at which point it will only transmit white noise.

With digital radios, coverage improves by 40% because voice transmissions are automatically converted into simplified computer language so that they can be transmitted more effectively across vaster distances.

Furthermore, Motorola MOTOTRBO digital two-way radios are outfitted with impressive features such as built-in Intelligent Audio technology, which adjusts the volume level based upon the presence of background noise while helping to produce a clearer message at all times.

The hospitality industry never sleeps, which means two-way radio battery life is an important factor to consider. It’s important that batteries can last a full shift so that personnel don’t have to worry about switching out devices all the time.

Digital and analog radios tend to use around the same power supply when in standby mode, but as soon as they start transmitting messages, digital radios offer far more efficiency. In fact, battery life improves by around 40% with digital radio systems. Some MOTOTRBO radios can operate for 24 hours before they need to be charged.

Additional Benefits to Digital Two-Way Radios for the Hospitality Industry: