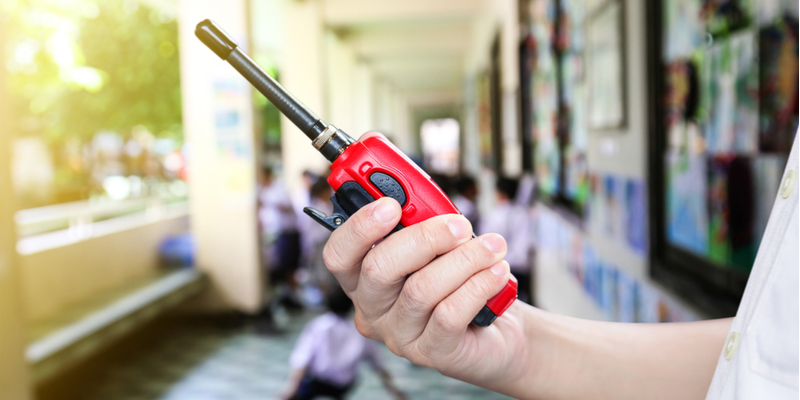 Communication in school is so important to the safety and overall wellbeing of students and staff. The Motorola Solutions 2017 School Communications Survey found that schools serve as an important trend setter for communication. They have a strong need for multiple devices on the job, as well powerful data applications. School employees want to be able to communicate instantly and utilize features like GPS tracking and text messaging.

Motorola surveyed more than 720 educators across 48 states including administrators, office staff, IT employees, transportation directors, teachers, athletics personnel, maintenance workers, and more. Here are some of the facts they uncovered:

According to Motorola, there are a variety of good reasons for school staff to utilize two-way radios.

“Two-way radios are purpose-built for highly reliable, instant communication between groups. Plus, two-way radios utilize secure, private networks that provide optimal coverage for the school and remain operational even during a crisis, allowing educators to communicate even when mobile phone towers are swamped by high traffic,” the study reports.

While just about every school listed safety as their top priority, there was some disconnect between priorities and current capabilities. 92% of schools strive to create a safe and secure environment, but only 25% of schools had the measures in place to achieve this.

Analog vs Digital Radios in Schools

Around 30% of schools are using analog radios, but there are so many benefits to utilizing digital technology, such as MOTOTRBO two-way radios. This is the leading form of instant communication, packing together features of a smart phone with the ease and reliability of push-to-talk.

Why are MOTOTRBO the best radios for schools?

There are many reasons why MOTOTRBO radios are the best for schools. For one, it gives a variety of different personnel – from the principle to the IT staff – a way to communicate using text messaging or push-to-talk. Plus, they have access to Bluetooth connectivity, GPS, and Wi-Fi connectivity. In addition, MOTOTRBO comes with advanced features for added safety like Transmit Interrupt, this feature ensures that the most important information is prioritized in an emergency.

As a Motorola two-way radio dealer, we offer a variety of Motorola radios for rent and sale. We are more than happy to help you find the right system to make your school run more safely and efficiently.