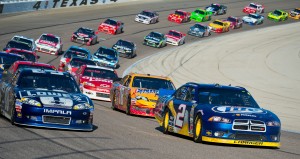 There are numerous industries all over the world that use two-way radios as a trusted form of communication between employees, supervisors, and outside sources. But nowhere else is there such a high concentration of radios than at a NASCAR race. With anywhere from 100,000 to 200,000 people in attendance, including fans, staff and race teams, radios number in the thousands.

During such a large event, a repeater is used to transmit both digital and analog signals from radio to radio. All frequencies available are used as the need for communication is in such high demand. Two-way radios began their use in NASCAR back in the 1970s, when crew chiefs began talking to their drivers about car performance, pit stops and strategy. Quickly two-ways have moved into almost all aspects of the sport. From fans to drivers, few people at a NASCAR race aren’t equipped with a two-way radio.

The driver is of course the key element of any race team. The driver wears a small radio that fits in 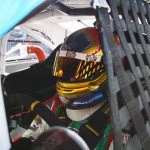 his ear that both gives and receives signals. A hands free device is a must, as he is busy driving, and is also wearing a helmet, along with other protective gear. The driver talks to his crew chief constantly throughout the race; when to pit, what will happen during a pit stop, how the car is performing and any changes that need to be made, where his teammates are on the race track, and more are all topics of discussion. The driver is also receiving signals from race track staff. When there is a caution on the track or there is an update on laps left the driver hears it via a one-way signal coming from NASCAR officials. The driver is also communicating with his spotter.

The job of the NASCAR spotter is to watch out for his driver. He usually sits up high, on top of the grandstands or a tower and radios down to the driver about accidents and race strategy. Drivers have extremely limited peripheral vision, due to their safety equipment and car structure, so a spotter is their eyes from up above. They can tell them which way to go around a wreck, where other cars are on the track, and when they are clear after passing another car. Spotters also communicate with drivers about who to work with on the track. Teammates (drivers who work for the same car owners) will often team up and draft, or work together to pass other cars. This is often worked out by spotters, who often all sit together. Spotters are also helpful to the car crew, as they can relay to them imminent changes in weather. At large race courses, many teams will have multiple spotters, as one alone cannot see the whole track. 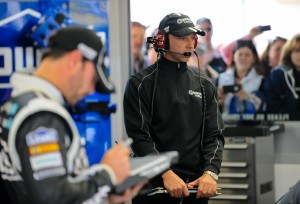 The crew chief for any race team is the head of operations. He decides on all the important matters during a race, and needs to be informed on a second by second basis. Throughout the race, he is talking to his driver, their spotters, and the race crew. In addition, he is also getting one-way signals from NASCAR officials. It is imperative to the success of the team that the crew chief be able to communicate, both sending and receiving signals, with anyone on the team at all times during a race.

The crew of a NASCAR team is like the organs in a person’s body. They keep the car running at peak performance 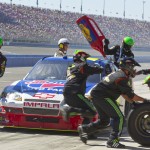 during a race, make major and minor adjustments during pit stops, and prepare between pit stops to help put their driver out ahead. Like the drivers, the crew use hands free two-way radios because they wear helmets and are constantly moving and using their hands. When a driver makes a pit stop, the crew can fill up their gas tank and change four tires in around 16 seconds! But, there are times when a driver only needs two tires, or a quick adjustment to the car. Many of those decisions are relayed to the crew via two-way radios.

The Staff and Officials 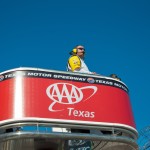 In addition to the race team, there can be upwards of 40,000 staff working during a given NASCAR event. This requires an extreme amount of planning and communication before, during, and after the race. There are officials who keep the race going, track maintenance workers, and emergency personnel, just to name a few. Like the race teams, specific staff functions are kept on certain frequencies and the staff does their best to communicate only when necessary, in order to keep radio channels open.

The media at a NASCAR event are of course using one-way radio and television waves to transmit information to the public, but what about to each other? Again this is where the two-way radios come in. Media staff are not only responsible for knowing up to the second information, who they are interviewing and what is happening on the track, but also who their colleagues are interviewing, who is up next, and who is being interviewed in real time. In order to keep all this information straight, they are set up with two-way radios to talk to other reports, the station or TV channel they work for, and the race teams.

The fans are the sole reason that NASCAR racing exists. Without them paying for seats, or watching the race at home, teams would have no sponsorship, and basically no reason to race. Income from fans pays for just about everything (besides the companies who sponsor each specific race – who only do so to advertise to fans). Today fans are becoming more and more in the know when it comes to the happenings at each event. And often the way they do that is with radios. All communication between teams is transmitted to nascar.com, where any fan can download an ap and hear exactly what is going on with their team of choice. In addition, many fans in the stands have two-way radios and listen in on the conversations being had on the many channels being used. They can also use two-ways to communicate with each other. Many fans will arrive on Friday and camp out until the race on Sunday, during which time families get spread out and can use two-ways to discuss current locations and meeting times.

Overall a NASCAR event has the highest number of two-way and one-way radios being used at a given time than any other event in the world. The smooth operation of both the staff and race teams is due in large part to the use of radios, and could not happen without them. The fans at the track and at home also get their information from both kinds of radios, and each year becomes more and more informed because of them. To a race team, radios are a key to not only their success, but also their driver’s safety. Spotters relay information to drivers that keeps them safe, and to most racers, safety is at the top of their priority list.