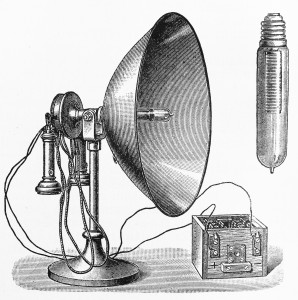 There were many key influences that helped the radio evolve into what it is today. We’ve already talked about how originally the radio was used only in simplex mode, and messages were simply transmitted via Morse Code, to recipients. There was no two-way communication going on, and even speaking was not yet possible via radio waves. But the idea that a form of electrical waves could be sent wirelessly to others across vast distances to send messages was innovative. Once these waves were more thoroughly understood, the advancement of their use happened exponentially.

Radios were first used in large ships out on the ocean, were before carrier pigeons were the only means of far away communication. In Australia, two-way radios were put into police cars by Senior Constable Frederick William Downie, and in World War II two-way radios were used by men on the ground and in the air, and by both Allies and the Nazis.

Before delving deeper into the historical timeline of the evolution of the radio (and subsequently the two-way), we would like to first start with the influential people who made that progress possible.

Although James Clerk Maxwell had already theorized that electromagnetic waves existed, Heinrich Hertz was the first to actually prove it. In 1886 and 1887 Hertz developed an apparatus to prove that electromagnetic waves could be sent and received wirelessly, using scientific methods to weed out all other possible variables that could have affected his results. In addition to his research on electromagnetic waves, he also began studying the photoelectric effect, which would later be built on and proven by Albert Einstein. Sadly, Hertz did not realize the importance of his findings. When asked of its importance, his response was that it had little value in the real world and was not significantly important. In 1894 Hertz passed away from Wegener’s granulomatosis, a form of vascular inflammation that affects the small and medium blood vessels. The hertz (Hz) is a unit of measurement named after Heinrich, defined as one cycle per second (Hertz History).

Before voice waves were able to be transmitted via radio waves, a system of dots and dashes was used to send messages. Samuel Morse, Alfred Vail and Joseph Henry invented the American telegraph back in 1836. Morse created the “language” used to send messages, beginning with only numbers being translated at each message end. Soon Vail took that system one step further and included letters. Before voice waves were sent over the air, Morse Code was the only way to get messages out quickly, and in many facets of the government there were jobs solely dedicated to learning and typing out of this code (Learn more on Morse).

Nikola Tesla, a scientist originally from Serbia who came to the United States to work for Thomas Edison, is best known for his work with alternating current machinery. He was an electrical and mechanical engineer, and soon after coming to America, struck out on his own creating new inventions. He sold the patent rights to his AC machines to George Westinghouse in 1884, and with financial backing kept researching in New York City for many years. He was known as a bit of an eccentric, or mad scientist, as his ideas were extremely futuristic and ahead of his time. One of his inventions, the Tesla coil, was used in the progression of radios. Today his popularity has made a come-back, with the Tesla car company basing many of its principles on his work (Learn More about Tesla).

Reginald Fessenden, a Canadian mathematician, moved to New York City in 1886 hoping to get a job working with Thomas Edison. He knew little about science or electricity, but told Edison he was a quick learner. After being put off a number of times, Fessenden finally got a job with Edison Machine Works  and quickly moved up in ranks. In 1892 he became a professor for the electrical engineering department at Purdue University (after Edison Machine Works lost funding and had to lay off many workers, including Fessenden). And in 1893 George Westinghouse himself recruited Fessenden as chair of the electrical engineering department at the Western University of Pennsylvania (now the University of Pittsburgh). Fessenden’s main research was in the use of voice/sound transmission via radio waves. He began working for the United States Weather Bureau to prove that weather information could be sent using a better developed apparatus and forgo the need for telegraph systems. In December of 1900, using funding from the weather bureau and his own inventions, Fessenden transmitted a sound wave about a mile away. This is thought to have been the first sound wave ever sent using radio waves. After Fessenden’s stint with the weather bureau ended in 1902 due to patent disagreements, two wealthy businessmen from Pennsylvania created NESCO (National Electric Signaling Company) to carry on with Fessenden’s research. The base for the research was in Massachusetts, where Ernst Alexanderson comes in. Fessenden believed that a high frequency alternator-transmitter was needed to send sound waves across far distances, and the gentleman put up to that task at GE was Ernst Alexanderson (More on Reginald Fessenden).

Taking the research and work of Hertz and putting it into practical use, Alexanderson created a radio transmitter that was used in the early 1900s to send radio waves over great distances, called the Alexanderson alternator. Originally from Sweden, Alexanderson worked for GE in Massachusetts and using his transmitter, was the first to send out music over the radio. Under the order of Reginald Fessenden, Alexanderson created a 75 kHz alternator and played Christmas music over it that was heard by Navy ships and shore stations all along the East coast. The first television broadcast was also to his home in Schenectady, NY. Alexanderson kept working well into his later years, consulting for GE and RCA. He passed away in 1975 and is buried in Schenectady (More on Alexanderson).

Like many of his counterparts, Edwin Armstrong was a prolific inventor. Over the course of his life he held over 40 patents, and many of his inventions for the radio were used in both World Wars in which he also served. He invented the regenerative circuit, the superheterodyne receiver and the modern frequency modulation (FM) radio transmission (Read More). Unlike many of his radio inventor predecessors, Armstrong was very withdrawn and quiet. He did his research on his own, having never worked for or been funded by a company or government entity. He questioned his professors and colleagues, and kept his patents as his own. Many of his inventions were created in his parents’ attic in Yonkers, and it wasn’t until the death of the professor of electrical engineering at Columbia did Armstrong take a scholarly position (31 years after graduation from Columbia himself). Many of the inventions that Armstrong created are still in use today, including regeneration, heterodyne radio and FM radio. Sadly, after years of litigation over FM patents with RCA and new FCC laws pushed in place by RCA (who was a strong proponent of AM rather than FM radio) Armstrong committed suicide in 1954. He left a letter to his wife, apologizing for fighting with her, and jumped out of his 13th floor apartment. His wife carried on with his court dealings, and many lawsuits were eventually settled in his favor.

There are many other influential figures in the history of radio, and countless inventions that have not only set the stage for radio, but also TV and telephones. Many of the theories established or inventions created for radio made their way into many other areas of technology, such as transmitter towers, ships, cars, and the list goes on. Battles have been lost and won on the basis of radio, and it has been said that a large part in why there were any survivors from the Titanic were because of the use of radios. Since the late 1800s we have been using radio waves to send messages, and we still do today. From our firefighters saving our lives to our government keeping our land safe, radios are in our past, present and future. Keeping us connected and informed, radio technology has been and will keep doing for us what no other form of communication has yet to do.