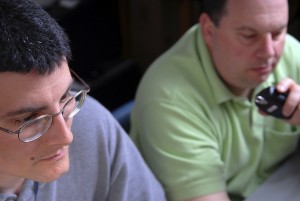 The one thing you should always be prepared for in life is the unexpected. When an emergency arises the best way to deal with the situation is to have a solid plan of action in place.

One of the worst things that can occur during an emergency is a loss of communication. Are you prepared to communicate in an emergency situation? Everything from dispatching appropriate response teams to contacting team members and loved ones rely directly on your ability to make contact with others.

Despite the grand importance of communication it is often left out of emergency planning, but it shouldn’t be. Every disaster that has unfolded teaches us the same lesson: in order to prevent further calamity clear communication is a must.

If an emergency strikes do you have a plan of action to reach out to appropriate people? All solid emergency plans should include a separate Emergency Communications Plan. After you create a plan it’s important to discuss it with your family, team members, and whomever else it involves.  Here are some important things to consider when creating your emergency communication plan:

If an emergency arises, knowing who to contact and how to react removes a great deal of uncertainty from an already hectic situation.

Communication technology has vastly improved over the years but it’s far from flawless. More than likely your cell phone will stop working in the instance of an emergency, even 911 phone lines may become overwhelmed and inaccessible. Two-way radios prove time and time again to be the most reliable form of emergency communication.

It’s highly advised that you are prepared to utilize more than one form of communication. Here is a list of the most commonly used devices for emergency communication.

Wide Area Radio Communication is the most reliable form of communication you can turn to during an emergency. The latest wide area technology allows two-way radios to reach as far as 300 miles. You won’t have to worry about radio lines tying up, as cell phone lines tend to do during an emergency. Plus, the superior transmission power ensures you can quickly contact people near and far.

Two-Way Radios vary considerably in power and range. The Family Radio Service (FRS) and the General Mobile Radio Service (GMRS) are designed to provide two-way communication over shorter distances, typically between 5 and 35 miles. Just like two-way radios that rely on Wide Area, you have your own radio signal which allows you to contact people without the concerns associated with overrun cell phone lines.

Ham Radio is not the most popular device, but knowing how to use one can be the difference between a calamity and a solution. The Ham Radio has been used during almost every emergency in the US for over one-hundred-years. When cell phone lines go down, the Ham Bands remain a reliable way to make outside contact.

CB Radio often brings to mind images of giant radios in old big rig trucks, but they play a vital role in emergency communication. You can keep a CB Radio in your car, office, and home to ensure it is always available no matter where danger strikes.  CB Radios generally allow one to make contact within a 20 to 30 mile radius.

Satellite Phones are far from cheap but they can be very useful during a crisis. Satellite phones do not depend on cell networks, and are far less likely to be impaired by increased call volume. Meaning that even if the entire cell network collapses your satellite phone will still work.

Cell Phones are something almost everyone has, but they are not the best for emergency communication. Phone calls and text messages are likely to fail during an emergency due to a dramatic increase in phone line usage.

Social Networks offer a new way to communicate during an emergency by posting status updates and/or sending messages. In order to access this option you will need a device capable of accessing the Internet. It is not recommended to use this as a primary form of emergency communication, although it is a great way to alert and communicate with large groups of people. When cell phones stop working for placing calls and sending text messages, social media apps often still work.