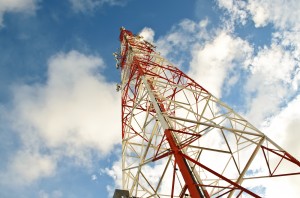 Radio waves have the longest wavelengths in the electromagnetic wave spectrum. They can vary in their size, anywhere from a few inches to miles long. In nature, radio waves are emitted by astronomical objects like the Earth, the Sun and other planets or created by lightning. We observe these radio waves from other planets and stars by building and using a radio telescope.

In 1867, James Clerk Maxwell proclaimed that there were both light and radio waves that travel in space and circle our Earth. Twenty years later, Heinrich Hertz confirmed Maxwell’s theory and was able to harness radio waves in his laboratory. Once Maxwell confirmed the existence of radio waves, and Hertz studied how to harness their power, we began using them mainly for communication. Because of Hertz’s ongoing work with radio waves, their frequency is now termed a Hertz (Hz).

In a vacuum, radio waves travel at the speed of light. In natural circumstances, they are slowed down by items at varying speeds. Different objects have different rates of permeability and therefore can even stop radio waves from passing through at all. This is why in areas where there are hills, mountains or thick vegetation, walkie-talkies and radios often cannot transmit signal.

The frequency of a radio wave is the inverse of its wavelength, or the distance between top of on wave to the next. We use different radio frequencies to “tune” into different wavelengths and the messages they carry. When using a radio, the antenna on that radio will pick up many different frequencies that are being transmitted during one time. In order to “tune” into one, we have settings that allow us to choose a station, or frequency so that we listen to only one message or set of messages at a time.

Radio waves created by man are regulated by the International Telecommunications Union. These rules and regulations decrease interference by users and designate which frequencies are used for certain communication. The ITU, which is a part of the UN, also governs over other forms of communication, such as the internet, TV broadcasting and aeronautical and maritime communications, just to name a few.

Radio waves transmit signals on the Hertz frequencies of 3 kHz to 300 GHz. These frequencies are split up and in different countries are assigned different functions for communicating. Some are free for civilians to use to talk to family or friends; others are for airline pilots, while still others are for communication between emergency personnel.  On a walkie-talkie, a person is able to set their device to a station, or frequency, and send and receive messages. A wave’s length, or frequency, will determine how far signals can be sent or received, in addition to the area’s terrain and any large objects, such as tall buildings.

In order to send radio signals even farther, companies are now starting to use repeaters that are set high atop tall structures to take in and them send back out radio waves. Using these repeaters, messages can be sent over hundreds of miles and done in a matter of a second. The areas in which repeaters are used are called Wide Areas. In order to use repeaters, you have to buy specific equipment that will work to send and receive signals to and from them. Your normal every day family walkie-talkie will not work.

Now that radio waves have been more thoroughly explained, along with their frequencies and governing body, choosing a communication device that is right for you will be that much easier. Taking into account the area you will be using your device in, its terrain, and location will help you decide which communication device is best suited for your needs.